Great Performances – Barbra Streisand: Back to Brooklyn
was featured in the 2013 PBS Arts Fall Festival.

The legendary Barbra Streisand gives a homecoming concert in Barbra Streisand: Back to Brooklyn. Streisand is joined by Chris Botti, Il Volo, and son Jason Gould for two hours of hits, including nine songs she has never performed on a concert stage.

Mixing her trademark classics with rarer older material and selections from her more recent albums, Streisand, in her first concert appearance in six years, and backed by a 60-piece orchestra led by William Ross, keeps the capacity house enthralled. In all, she sings 27 songs, nine of which she has never before performed live, and three which she sings in different ways; that is, either with different arrangements or with newly composed lyrics.

The songs are framed by multi-faceted video montages of Streisand’s childhood and early career. Her alma mater Erasmus High School, the Loews Kings Theatre, the Dodgers, her yeshiva, Brighton Beach and Brooklyn Heights all figure in her reminiscences. The superstar left her fourth-floor apartment at 3102 Newkirk Avenue (one of three residences at which she lived as a child) when she was 16 to pursue her acting career, and the rest is history. 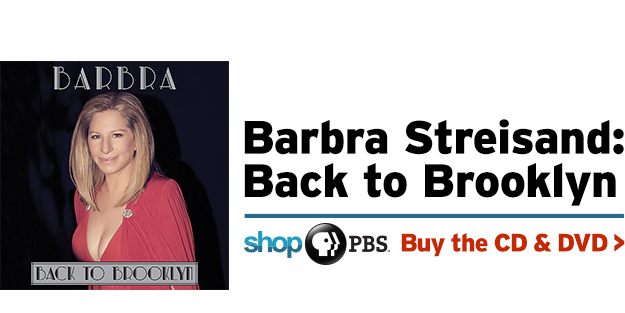